OHVs and the Castle Parks: Are They In or Out?

That’s the crucial conservation question left begging in a newly-released document on what Alberta Environment and Parks expects in a draft management plan for the Castle Parks. Alberta Wilderness Association (AWA) and the Castle-Crown Wilderness Coalition (CCWC) would like the Minister to answer the question definitively and commit unequivocally to the management plan’s vision: “Conservation of nature will be the primary, overriding objective of both parks.” 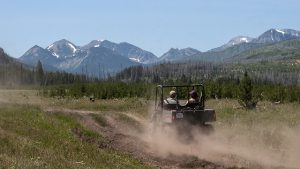 “On the one hand, the proposal contains a number of encouraging statements,” says Joanna Skrajny, AWA Conservation Specialist. “For example, conservation and headwaters protection are intended to be the top two management priorities; they animate the stress placed in the document on protecting critical westslope cutthroat trout habitat.” Environmental leadership and evidence based decision-making are admirably placed at the top of the list of principles intended to guide the plan. “But, these positive elements,” she adds, “are fundamentally irreconcilable with the document’s later suggestion that off-highway vehicles should be allowed in both parks. You cannot seriously prioritize conservation and headwaters protection if you allow motorized recreation in the Castle.”

The CCWC, a local, grassroots organization that has been fighting for protection of the Castle Wilderness for decades, joins AWA in this call. “Eighty-six percent of Albertans prioritize non-motorized recreation and the majority of the public believes that OHVs have no place in provincial parks. It pushes out other users and harms wildlife,” adds Peter Lee of the CCWC. “Considering that Waterton and all of our mountain parks are bursting at the seams with visitors, it seems like a no-brainer that Albertans are searching for and would be grateful for more of the national park type experience.”

The Castle Provincial Park and Wildland Provincial Park were announced on September 4, 2015 by the Government of Alberta. Sadly, despite public outcry and substantial consultation, the recommended management intentions outlined in the document released today – allowing OHVs, recreational hunting, and cattle grazing in the parks – have barely changed compared to what the department proposed more than 10 months ago.

“While this is disappointing and frustrating,” says Dr. Ian Urquhart, editor of AWA’s magazine Wildlands Advocate, “there is promise where this document says the Minister still may decide to modify the recommended management intentions to prohibit OHVs and hunting in the parks. It’s time for the Minister to decide once and for all whether OHVs are in or out of the Castle parks. Conservation and a truly modern view of Alberta parks demand that she rejects the recommendation to allow OHVs in the Castle.”

Link to PDF version of this news release